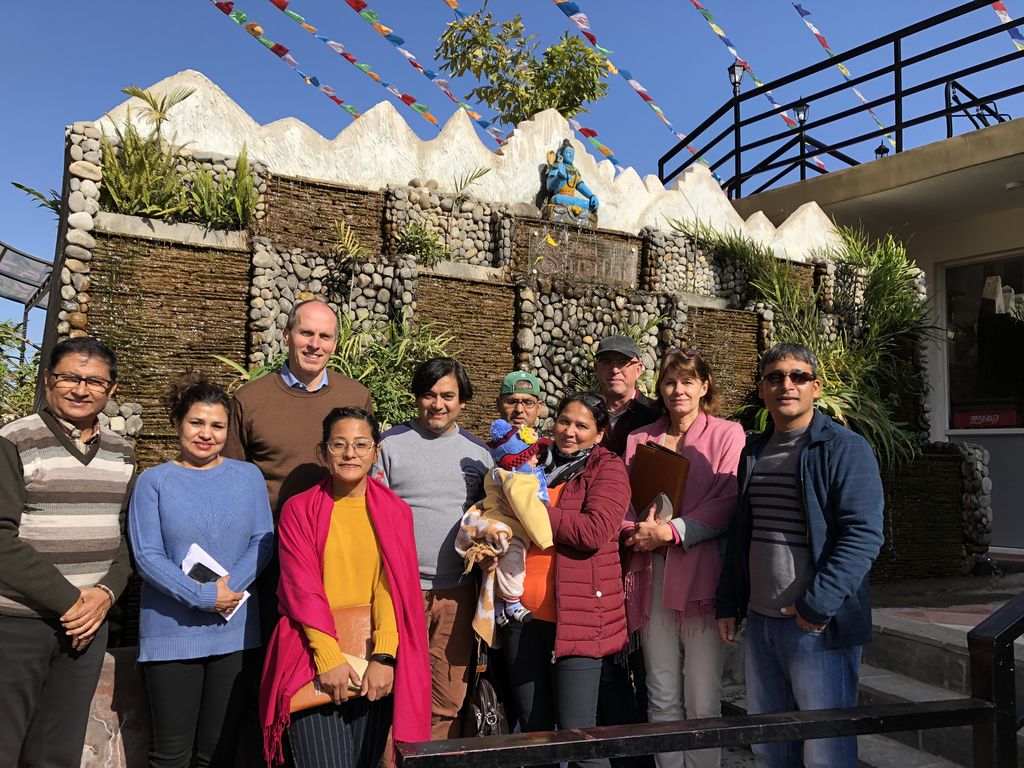 The research team decided to include all seven provinces in Nepal to ensure that the data represented the situation of educational inclusion nationally. Within a province, two districts were selected ensuring that schools and municipalities represented both the mountainous and hilly regions in the Northern belt and the Tarai in Southern plains or East to West if they were in similar ecological belts. This approach helped us cover diverse geographical regions.

Selection of Districts:  A total number of districts (N) was divided by the required number (n=2) and a sampling interval was derived. A random number was generated by the computer to select the first district and the second was selected by adding the interval in the serial number of the first selection.

Selection of Integrated Schools: An integrated school, with a special provision of education for children with disabilities, located in the nearest area from one of the chosen general schools was selected to account for a comparison of socioeconomic settings. This was a deliberate selection.

A series of face-to-face (Dhulikhel, Nepal – Dec 2019 and Oslo, Norway – Feb 2020) and online meetings were held to discuss the conceptual issues of inclusive education in Nepal. Identified issues were designed in the form of variables and further developed into appropriate questions. Social and Academic Innovations Pvt Ltd (SAIPL) coordinated the process of questionnaire design in collaboration with the Faculty of Education and Central Department of Sociology in Tribhuvan University in Nepal. The draft questionnaires were shared with the research team several times for their feedback which were carefully incorporated while finalizing the structure questionnaire.

Following sets of separate tools were prepared and administered.

The Student Questionnaire was administered to students studying in grade 10 in each sampled school. The number of sample students was fixed to 20 for a larger group. Besides, the number of students not exceeding, at least one and a half (or 30) of the decided sample (20) were all interviewed. This system also compensated the number of students being less than 20 in some other schools.

The Student Questionnaire consisted altogether 114 questions in 16 different sections namely background; personal information; family conditions – economy, responsibilities, facilities at home and expectations; inclusion in community; school culture and inclusion; drop-outs attendance and performance; discrimination at school; classroom management; observation of students; child club and leadership; security and grievances; perception towards menstruation; disability; the impact of COVID19 and students readiness; and suggestions. Since a number of multiple answer questions are included in the questionnaire the data set of students file in SPSS included 439 variables including a few KoBo Toolbox formality generated items and records of 712 students.

Why grade 10? Grade 10 students were supposed to have had the experience of Municipality level examination in grade VIII after implementation of the federal system in Nepal. These are the witness from the demand side, of the practice of inclusive education. The survey captured their experiences generally of last three years regarding inclusive education after the federal system was implemented in Nepal in 2015 and local levels were made responsible for the school education system. This group of students is also at least 14 years of age or more, and able to respond to the questions based on their educational experience.

Procedure of selection:  A list of the students was obtained from each sampled school. The students were segregated by their ethnicity as Brahman, Chhetri, and Sanyasi; Janajatis; Tarai Brahman Chhetri and Sanyasi; Tarai Caste; and Dalits – by their sex and arranged in an alphabetical order. The total number was then divided by 20 in order to derive sampling interval and the first one was selected from within 1 and the interval, and others were selected by using a systematic random sampling scheme.

The Parent Questionnaire was administered to the parents of selected students. Therefore, there was no specific method to select parents. However, the piece of information worthwhile here is that not all parents were met by survey teams, because a few of them lived beyond the school catchment areas. Few students were also living in quarters far from their home village/towns.

The parent questionnaire included 71 questions in 13 sections as background; personal information; socio-economic condition of family and community; management of educational expenses; involvement of the student in household and income-generating activities; study environment for child at home; participation in community activities; child and the school – learning environment; parent-teacher interaction; discrimination in school; the impact of COVID 19; changes and development in the past three years; and suggestions. Due to a number of multiple-answer questions included in the questionnaire, the data set of parents file in SPSS consisted of 273 variables, including a few KoBo Toolbox formality generated items and records of 694 parents (97.5% of students).

Initially, separate questionnaires for general teachers and resource teachers were designed. However, only seven integrated schools and the possibility of incorporation of a small number of teachers drove the idea to merge both questionnaires into one. Since the 10th-grade students were in the pivotal place for the analysis of the experience of inclusive education, the research team included the teachers who were teaching from grade 7 to 10. This group of teachers was compatible with the experience of students during the last three years after the management of school systems by municipalities.

The Teacher’ Questionnaire included 10 sections as background; personal information; inclusion; practice related to access and enrolment; practice related to retention; inclusive learning practices; professional development of teachers; COVID19 and learning continuity; observed changes; and suggestions. Since a number of multiple-answer questions were included in the questionnaire, the data set of teachers’ files in SPSS included 415 variables including a few KoBo Toolbox formality generated items and records of 335 teachers.

The governance questionnaire consisted altogether 63 questions in 10 different sections namely background; personal information; school facilities and changes since 2016/17; inclusion: understanding and practices in the municipality; support from other agencies to the school; cross-sectoral/inter-agency cooperation in the municipality; COVID-19 and learning continuity; education policies and staffing in local government; relationship with the federal government; and suggestions. Since a number of multiple-answer questions are included in the questionnaire, the data set of governance file in SPSS included 364 variables including a few KoBo Toolbox formality generated items and records of 714 governance actors.

This set of questionnaires aimed to collect objective and mostly numerical information from the schools. It consisted of 69 questions in nine different sections as background; general information of respondents; general information of institution; plan and policies related to inclusive education; financial and other support for students; disability and school; disability-friendly infrastructure; diversity management; and suggestions. Since a number of multiple-answer questions are included in the questionnaire, the data set of the school administration file in SPSS included 232 variables, including a few KoBo Toolbox formality generated items and records of 35 schools.

Note: No person was repeated as a respondent. Some of the governance actors and teachers were also parents, and few teachers served as SMC members which appeared only once in the survey. They were given a choice for selection of their role.

The research team organised two training sessions for the interviewers who were recruited from across the districts where the survey was conducted. They represented diverse backgrounds – gender, caste and ethnicity. The first training was conducted in November 2020 which was combined with piloting of the questionnaire. We improvised the questionnaire based on the feedback from the interviewers and responses gathered from the participants during the pilot. COVID-19 affected the post-training period, and we were not able to conduct the survey due to school closures. Considering the long gap and some changes in the questionnaire the second training event was organised in September 2021 and the window period when the lockdown was eased was utilized for the survey. The survey started in October 2021 and was concluded in the first week of January 2022. The schools and municipalities were contacted prior to field visits. During the lockdown period, we organised 10 online focus group discussions with multiple stakeholders which further informed the process of questionnaire revision. All selected schools and municipalities fully cooperated in the survey.

E. Use of KoBo Toolbox

These data files were uploaded to a server and was accessible to the project team.

SAIPL team visited selected locations and was in continuous contact with field staff to deal with any problems. Some head teachers and other respondents needed clarifications about the study in. addition to the written letters mentioning the essence of research, and SAIPL engaged in conversations with respondents and interviewers where necessary in order to facilitate the field survey.

After the survey was completed the total data set was transformed from KoBo to SPSS and frequency tables were generated after editing some minor errors. The preliminary analysis of the survey data enabled the research team to identify schools and municipalities for qualitative interviews.

H. Overall experience and learning from the process:

The school system in Nepal is in transition and people engaged in it are eager to take a stride towards effective delivery. Therefore, they are eagerly waiting to know findings of the study. They were co-operative in almost all locations. However, the local level in Nepal is neither much aware of the value of data nor is able to effectively deliver inclusive education to the needy people. There is a need for maintaining database in every school in order to formulate appropriate community based specific policies and enable the students to be a part of national inclusive education system.