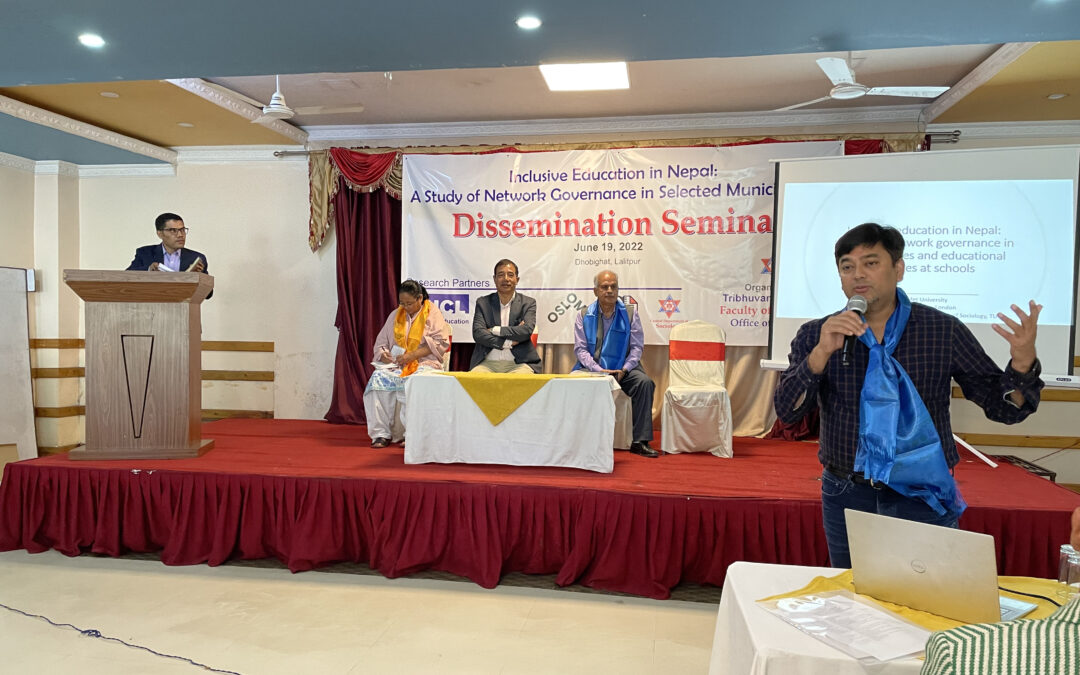 On 19 June 2022, the Faculty of Education, Tribhuvan University organised a seminar to disseminate preliminary findings of the study in Lalitpur. Despite some delays caused by the repeated outbreaks of COVID-19 in completing the survey and follow up qualitative fieldwork, the research team managed to conduct questionnaire survey with 712 students, 694 parents, 714 government/ NGO officials and 335 teachers in 28 general and 7 integrated schools across the country (N=2455). Following the survey, qualitative interviews were conducted with teachers, members of the school management committees, officials from local authorities, and educational practitioners based in local NGOs in randomly selected six schools across five districts: Gulmi, Kapilvastu, Parvat and Siraha and Rautahat. During the school closures, the research team organised 10 focus group discussions with school head teachers and education practitioners across five provinces of Nepal.

The dissemination seminar was attended by appropriately 60 researchers, academics from various universities, officials from the Ministry of Education and its constituent departments such as Curriculum Development Centre. Jaypuri Gharti, a key member of the Education Select Committee of the Federal Parliament of Nepal was the chief guest of the event. The delegates were welcomed by Professor Dr Chitra Bahadur Budhathoki, the Dean of Faculty of Education, Tribhuvan University followed by an introduction to the research project by Dr Tejendra Pherali, a member of the project team. Dr Pherali highlighted that the project involved a national level study to understand the situation of inclusive education in Nepal and to provide empirical evidence that could potentially inform policy debates around inclusion in education. The research is aligned with the Sustainable Development Goal 4 that aims to ensure inclusive and equitable quality education and promote lifelong learning opportunities for all. Dr Pherali pointed out that given the historical challenges around educational inequalities and exclusion of Dalits, girls, and other disadvantaged communities in Nepal’s education system, educational reforms in the new political environment should concentrate on how to ensure equity in access and learning for the most disenfranchised communities. In this sense, research into inclusive education should underpin a critical lens that accounts for the way power (political, social and cultural) and resources (economic, discursive and epistemic) are distributed across different social groups (e.g. gender, class, ethnicity, caste, religion, disabilities, regions etc.).

As the governance of school level education is now devolved to the local authorities, it is vital to empower local stakeholders and facilitate collaborations between different institutions (e.g. municipalities, non-governmental organisations, school management committees, parent-teacher associations and students) in order to build synergy and mobilise different kinds of knowledge, resources, competences and ideas that enhance the production of public value in education. The policy framework on inclusion should adhere to the following key principles:

Hence, the study focused on the following questions in survey questionnaires and qualitative fieldwork:

The project team explored macro level social dimensions that were likely to predict exclusion/ inclusion in education and practices of inclusion at policy, pedagogical and curricular levels. Reflecting on the educational environment that embraced multistakeholder involvement in educational planning and delivery, we investigated collaborations within local governance networks and the extent to which they benefitted the most marginalised children and identified conditions and change agents that enabled inclusive education practices.

Bidhan Acharya, the Senior Researcher from Social and Academic Innovations (SAIPL) and Professor Aadne Asland from Oslo Metropolitan University, Norway led the presentation on research design and discussed some preliminary findings based on the survey data.  Acharya described the challenges around collecting data during the pandemic but reported that the use of Kobo-tool proved to be an effective way of recording data directly from the participants. He showed that the frequency of parental interactions with teachers is corelated with levels of inclusion and government actors enthusiastically reported that schools had improved since the local governments were elected under the federal constitution 2017. Another interesting finding from the survey was that rural municipalities respond to the needs of schools more responsibly than their urban counterparts, indicating some positive signs of educational improvement in rural areas.

Professor Basu Dev Kafle, Assistant Professors Pitambar Acharya, Ram Chandra Giri and Yadav Prasad Acharya presented a paper on ‘Inclusion of students from resources classes to general classes including transitioning’. They argued that the children with disability had largely been neglected in Nepal’s education system and most of the integrated and special needs schools lacked basic resources and trained educators to meet their students’ learning needs. Professor Kafle expressed his discontent about the government’s failure or unwillingness to formulate policies that were informed by the research evidence. Dr Pramod Bhatta from the Department of Sociology, Tribhuvan University and Professor Arild Schou from the University of Eastern Norway presented a paper on ‘Local government’s understanding and practice of inclusive education in Nepal.’ They pointed out that the local governments had primarily focused on infrastructure development projects such as building roads and school classrooms whilst most of the educational funds had been spent on paying the temporary contract teachers who were recruited to support expansion of school grades. They pointed out that there was a need for radical shifts in the way local governments conceptualised inclusion – that schools needed to adopt the idea that all children should not only access schools but also achieve equitably in education. To create truly inclusive classrooms, schools needed more resources, professional development programmes for teachers and most importantly, they needed to take the responsibility to improve quality of learning for children from the most disadvantaged communities.

Jaypuri Gharti, a member of the federal parliament praised the research team for conducting such an important study that would help the government formulate new education policies focusing on inclusion. She emphasised that researchers had to engage with law makers to facilitate policy change, otherwise, the research would not make the desired impact. She also hinted that she would be interested to invite the research team to present research findings before the Education Select Committee in the parliament which was currently working to formulate a new education policy. She expressed that the lawmakers were genuinely interested in formulating policies that could improve educational outcomes for historically disadvantaged communities and it was the right moment to hold dialogue between educational researchers and parliamentarians. Following the research presentations, participants were invited to engage in discussions, reflecting on the findings shared by the researchers and to share their thoughts on how to promote inclusive education in Nepal. Representatives from disabilities association pointed out that Tribhuvan University, the leading higher education institution in Nepal needed to make its physical environment more disability-friendly and the government to listen to the voice of the people who were struggling because of multiple forms of disabilities. The presenters responded to the questions raised by seminar delegates.

The seminar was concluded by Professor Shiva Lal Bhusal, the Rector of Tribhuvan University. He hoped that the research team would share publications with the wider education community in Nepal and engage proactively with the policy makers in future.

Inclusive education in Nepal is a research project funded by Research Council of Norway.

Dr Tejendra Pherali is Associate Professor in Education and International Development at UCL Institute of Education and Deputy-Team Leader in the Inclusive Education in Nepal project.