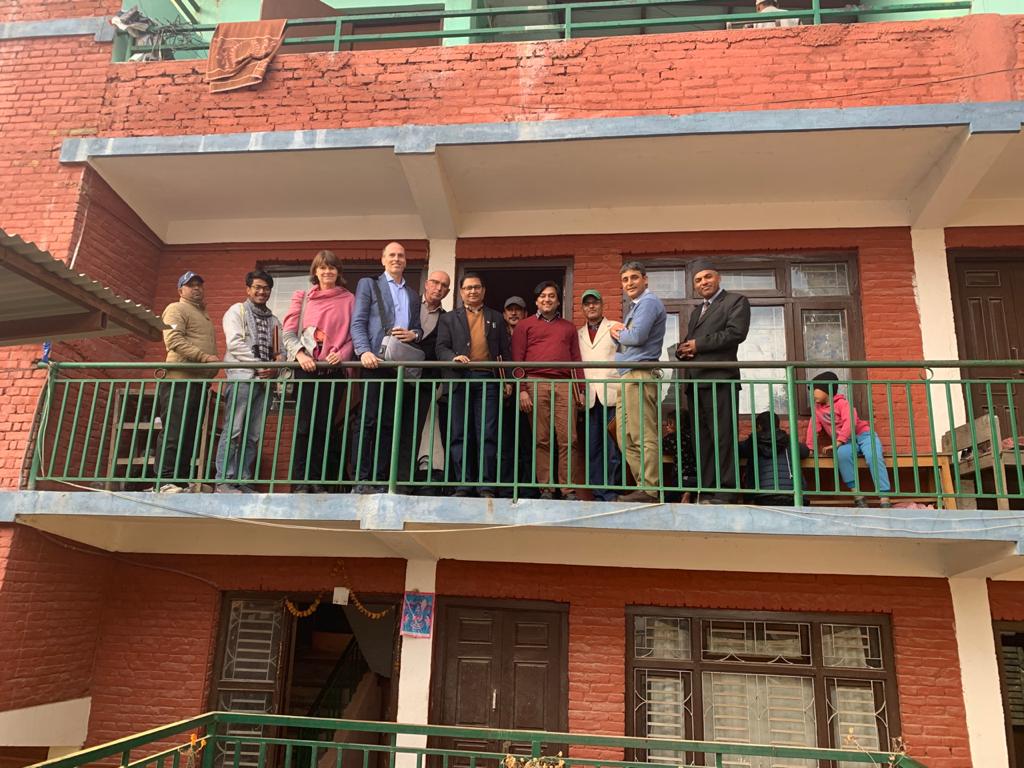 When the project Inclusive Education in Nepal: Policies and Practice was initiated and funding secured at the end of 2018, nobody could have foreseen the scale of challenges we had to face due to the Covid-19 pandemic. The restrictions on travel and school closures prevented us from conducting the face-to-face interviews with educational stakeholders. With five different population groups to be interviewed – governance actors, teachers, pupils (10th grade), their parents, and authorities of school administration – conducting web-based surveys or telephone interviews was impossible; face-to-face interviews were the only possible and reliable method.

Initially, preparations for the survey proceeded as originally planned. Several meetings were organized between the project team, in person (in Dulikhel, Nepal in December 2019, and in Oslo in February 2020), and a series of online workshops for the whole team to meet and design the questionnaires for the survey. The team members had many issues they wanted to be answered by the survey, and one of the main challenges was how to include all relevant questions without making the questionnaires too long and time-consuming for the participants. We all had to accept that not all issues ‘nice to know’ could be covered and to restrict the questionnaires to the ‘need to know’ questions. The questionnaires went back and forth among team members who were divided into groups with main responsibilities for the different target groups. The questionnaires were eventually finalised after rigorous exercises that considered both conceptual and technical aspects of instrumentation (soon to be uploaded to the project website).

The sample schools were randomly selected across Nepal’s seven provinces and also to further select respondents in a random manner. At the same time, given distances and transport challenges in Nepal, some stratification needed to be done in order to reach the selected schools. Thus, the sampling procedures involved the selection of two districts from relatively different geographical locations to further select two municipalities (rural and urban each) in a district, which again selection at random of a government school from the list in the municipality. All these summed to four general schools in each province (two schools in two different districts). In addition, one integrated school in each of the provinces was also selected, and altogether the number of selected schools was 28 + 7 (35) schools. From these schools, 10th-grade pupils and their parents were further randomly selected, while special criteria were put in place for the selection of governance actors. Luckily, all schools agreed to collaborate and helped identify the respondents.

With questionnaires and sampling procedures in place, we were set for fieldwork. Social and Academic Innovations (SAIPL) had recruited a network of experienced enumerators, who had undergone training to familiarise themselves with the project and specifics of the questionnaires, and also in using the KoBo toolbox – a web-based software for data collection. This meant that enumerators could use smartphones to register the answers during the interviews, and the data were uploaded to a server transferring them to different statistical package formats. The entered data were uploaded to the server that was readily observed by SAIPL in Nepal and OsloMet in Norway. Some issues were observed and discussed immediately and managed in order to facilitate the fieldwork. In addition, a few unintentional mismatches in the name of schools and provinces were also quickly noticed and duly edited.

But, alas, with everything prepared for action, it was impossible to go into the field – it would have involved too big a risk to enumerators and the possibility of transmission of the virus and, besides, schools were either closed down and some being used as quarantine facilities or personnel too involved in handling the pandemic to be able to engage in our survey. So, we had to put the fieldwork on hold.

Eventually, a window period of opportunity was projected in Nepal for the third week of September 2021 and onwards. SAIPL organised a second round of training for interviewers during September 17-19, 2021, and deployed them to the respective field of selected schools. Since Nepal observed two festivals in the second week of October and the first week of November, in which schools and other agencies also observed vacations, enumerators were advised to conduct the survey at their convenience but with a target of completing the task within December. Bagmati Province (3) started the survey and completed it in the estimated time in the second week of November which helped build confidence for others to do the same. Mountainous districts like Humla in Karnali Province (6) and Manang in Gandaki Province (4) had some travel difficulties. Winter was approaching and schools were scheduled to close due to anticipated snowfalls. SAIPL deployed the staff of Bagmati Province to help sick colleagues of Gandaki and contacted the head-teachers of Humla (Karnali) to help identify possible interviewers. Interviewers for the two municipalities of Humla were identified and they were given intensive training on how to use the Ko-Bo Collect and knowledge on the questionnaires. The other three locations were well covered by other previously trained interviewers. In the meantime, Province 1, Madhes Province (2), Lumbini Province (5) and Sudoor Pashchim (7) had completed the survey. And, by the last week of December, almost all of the survey was completed in all provinces. Only the data from Humla were submitted in the first week of January 2022.

Thus, the window period of Covid-19 was best utilized for the survey before the third wave of COVID-19 with the Omicron variant and snowfall in mountainous areas.

Today, we are very pleased that despite all these challenges, thanks to the commitment from SAIPL team members, and also diligent enumerators, we have successfully completed the survey in all provinces, districts, and schools in accordance with our original plans. Today, we have high-quality data on inclusive education in Nepal covering 35 school administrations, 714 governance actors, 335 teachers, 712 pupils, and 694 parents (2490 total)– in five different data files ready for in-depth analyses of the mechanisms of inclusive education in Nepal.

COVID-19 has been a major barrier for timely implementation of the project, but we have learnt that it is possible to collaborate online as a research team and develop effective research tools that reflect the change in social, educational and public health environments. For example, the situation of COVID-19 and its adverse effects on schooling enabled us to incorporate new questions in our survey. It was also vital to be guided by local research partners who were able to sensitively gauge the severity of the pandemic, weather conditions and geographical challenges. The survey would not have been completed without the leadership and longstanding experience of SAIPL and relentless dedication and diligence of everyone involved in the team. This process has taught us how to adapt to new challenges faced in the field; be courageous about returning to research questions and prepared to develop new methodological approaches rather than being fixated with what was planned before the pandemic; and most importantly, being able to use the window of opportunity to complete the data collection. In conclusion, research in unstable environments is only possible through collective, creative and agile efforts.